Out and about in Alpine 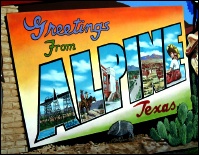 We're in Alpine today, but just for a little while longer. We rolled into this West Texas town -- Hub of the Big Bend, home of Sul Ross State University and creative hotbed with dozens of art and artisan galleries scattered about town -- on Sunday afternoon.

Unfortunately, all of the shops were closed when we got here. If I were truly paranoid, I'd think our husbands phoned ahead and pleaded with local merchants for a little economic pity in light of the stress we've already put on our respective family bank accounts with this trip.

Sorry, gentlemen, but since we have no firm timetable, Kathy and I are going to check out several of the galleries this morning before we head back to Austin. So be prepared!

To rest up for our vacation's final stages, in both shopping and driving, we stayed last night in yet another historic lodging, the Holland Hotel. It was built in 1928 and it is starting to show it's age, so the owners are doing some renovating. It really wasn't a bother, other than having to take the stairs since the elevator was out of commission.

Of course, that exercise probably was a good idea, especially after our Sunday night meal in the hotel's Edelweiss Restaurant. Yep, just like the song from "The Sound of Music."

As the name indicates, and you can see from the picture below, it's fashioned after a German beer hall and the specialties are, according to the menu, "Bavarian favorites." Kathy had spent some time in Germany, so she was a better judge than I of the schnitzels we ordered. Her verdict: not bad, but not precisely authentic. All I can attest to is that the servings were definitely Texas-sized. And even though I ate way too much, I still left a good amount of Jaeger Schnitzel on my plate.

However, I downed every last drop of my dinner beverage. And what, you ask, was in that drained stein? A pint of the Edelweiss' own Texas Black Gold. It's one of four beers the establishment brews on premises under the Bavarian Purity Law of 1516, which the microbrewery says is still practiced "in its original form in Bavaria, Germany, and Alpine, Texas."

A Bavarian dark lager. Malt and chocolate aroma. Light, refreshing malt in the mouth, dry to finish with some coffee notes. A little cloudy because it's unfiltered to keep the natural flavor, aroma and full body alive. Approximately 5.5% alcohol by volume. A must for dark beer lovers. Goes very well with rich food, steaks.

My official description of Texas Black Gold: Another glass, please.

There once was a guest from Austin...: In addition to having the only German restaurant and microbrewery in the Big Bend area, the Holland Hotel's unique style extends to guest room amenities. For example, the towels and washcloths are tied with ribbons to which small poems are attached.

You also get a set of complimentary earplugs to help you cope with the overnight runs of the Southern Pacific rattling along the rails just across the street. The verse that accompanied the foam stoppers: "We think our train is very quaint, but if ears it pains, plug 'em and it caint."

OK, not Walt Whitman, but sincere. 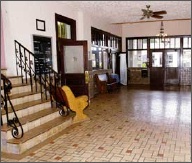 But the one that caught Kathy's and my eye:

Tommy Lee, we want you to know we are still among your biggest fans, despite your little run-in with the Holland Hotel's management. We're sure that you've matured immensely in the 15 years since that incident.

And if you ever find a local inn won't give you a room, you can always count on us for a place to bunk.

I am so jealous! I love that area! I keep telling my wife and son that we're going to take a trip to the Big Bend region, but we haven't made it yet.

The park, Alpine, Marfa, Chinati Hot Springs, Marathon, Fort Davis, even Presidio and Ojinaga -- what a wonderful corner of our world! Plus, Carlsbad Caverns and Guadalupe Mountains National Park aren't all that far away.