Hello from the wilds of West Texas. All is going quite nicely on the trip down memory lane that my cousin Kathy and I are taking.

We haven't gotten irreversibly lost yet. We've generally agreed on what attractions to see (and avoid) in each of our stops. And we're still getting along, despite not having spent this much time together since we were small children and had our parents to whine to if necessary. I am happy to report we are not whining. Just a little wining with our dining.

Our first extended stop was in Kermit, which I mentioned in yesterday's post. Then we buzzed through Wink and Pecos (more on these stops next week when I get back home), before heading to the Davis Mountains.

Ah, yes, the mountains. This is the part of the trip I was really looking forward to. The last time I was here was when I was a child and Kathy had never been to this area, so I had high hopes it essentially would be a new and enjoyable adventure for us. I haven't been disappointed. 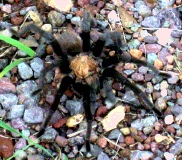 In addition to offering spectacular vistas, the weather here has been notably cooler. So invigorating, in fact, that we've taken advantage of it by doing some hiking. Nothing that strenuous, just a little communing with nature, including the tarantula pictured here and a rattlesnake, not pictured because we didn't hang around long enough to snap his photo.

We encountered the tarantula Friday on the grounds of the Indian Lodge in Fort Davis State Park, a place suggested by Kathy's boss. Are we glad we took his advice. It's a rustic mountain lodge, with the original section built in the 1930s by FDR's Civilian Conservation Corps. The photo below is the exterior of our room. 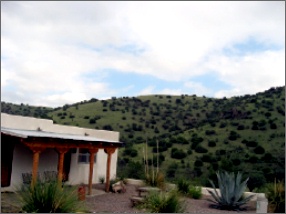 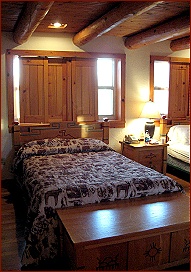 And here's a look inside. That glimpse of unmade bed is Kathy's. To be honest, I didn't make my bed; I just pulled up the bedspread for the photo.

We ran into the snake Saturday morning as we strolled the grounds of the Fort Davis National Historic Site. The fort was an outpost from 1854 to 1891. Since I visited the site many, many years ago as a kid, the National Park Service has really added to the site's attractions, including many reconstructed buildings and audio/visual enhancements.

The snake, however, was not in the official Fort Davis self-guided tour brochure. 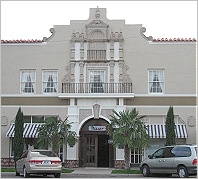 The encounter with one of nature's least friendly creatures made us doubly glad that we had a nice, safe place to spend Saturday night: Hotel Paisano in Marfa. This photo is of its Highland Street entrance.

Hotel Paisano was my choice, primarily because I'm a movie nut and this was where James Dean, Rock Hudson and Elizabeth Taylor stayed when they were in the town 50-plus years ago filming the movie "Giant."

We didn't get one of the stars' rooms, but ours was nice. Plus, we had our trip's best meal so far in the hotel's restaurant, Jett's Grill.

Indian Lodge and Hotel Paisano provided a nice change from the motels we stayed in Wednesday and Thursday nights. Not that they were bad. They were just, well, budget accommodations.

And I'm glad we stayed in those places the first couple of nights of our trip, because by my vacation accounting method, their lower prices freed up cash that we then got to transfer to the higher-priced lodging of Friday and Saturday nights.

Sure, we could have stayed in cheaper rooms every night. But that adage "you get what you pay for" has proven true for us so far.

And it is our vacation. If you can't splurge a little while on holiday, then when can you?!?