All hat and thirsty cattle

We tend to think of natural disasters in terms of sudden, horrifying events that sweep through an area and ravage the countryside, as well as the psyches of its residents.

But disasters can be just as devastating at a much slower pace.

Take, for example, drought. You go a few days without rain. That stretches to weeks, then months. One day you look at the calendar and a year has passed without any appreciable rainfall and it seems like every ounce of water around you has dried up.

We're in the midst of that here in Central Texas. Oh, we got some hit-or-miss showers last week (it was miss at our house). But we haven't have a good rainy season since the hubby and I moved back home in May of 2005. You can read my earlier concerns about the area's rainfall deficit in this posting from back in January. 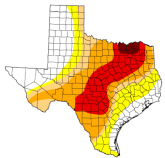 And as indicated by this map, with the red and purple areas being the driest, Austin isn't even in the worst of it. We're just on the edge of extreme drought conditions. But we all feel like we're going to blow away with the next big gust of wind. I thought by moving to Austin instead of West Texas, where I grew up and arid conditions are more common, we wouldn't have to worry about water. Sadly, I was wrong.

I shouldn't be allowed to whine. All I have to worry about is a crunchy lawn and some stressed plants. And I don't even really worry. That's the hubby's job, as he frets over the palette of our yard, which gets browner by the day. The people really suffering are those trying to make a living while dealing with the whims of weather. Agricultural enterprises are taking the biggest hits, not only here in Texas, but nationwide.

In view of that, the Uncle Sam is offering some tax relief. The IRS has announced that farmers and cattle ranchers affected by exceptional, extreme or severe drought conditions have been granted additional time to purchase replacement livestock they were forced to sell and deal with any tax implications of the sale.

When an area is eligible for federal assistance due to drought conditions, taxpayers usually have four years to replace, without facing any capital gain implications, the livestock that they were forced to sell because of the drought. The four-year replacement period was set to expire this coming Dec. 31.

But now, thanks to the IRS action, a farmer or rancher who sold animals because of drought condition won't have to pay capital gains taxes for a year after the parched conditions end.

The one-year extension applies for any week in the 12 months ending Aug. 31 in counties dealing with any of the three worst drought designations. This extra tax deferment time will let ranchers reinvest in livestock at a time when weather conditions can better sustain larger herd numbers.

Don't let your babies grow up to be cowboys: Now I know this doesn't mean much to most of you readers. But as a native of Texas, the nation's leading cattle producer, I felt compelled to share this bit of good tax news for ranchers. They need some.

According to industry statistics, Texas' 150,000 or so ranchers have been culling herds for months because of drought-produced hay shortages. And Texas agriculture officials estimate that through the first seven months of the year, the state's livestock industry has suffered $1.6 billion in drought-related losses.

You can see if your ranch, or even just your state or county, is officially in a severe drought area by checking the U.S. Drought Monitor, from whence I clipped the above image of the Lone Star State's current dry conditions.