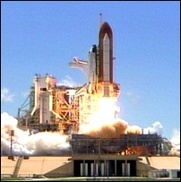 NASA did its part for America's 230th birthday celebration today, launching the Space Shuttle Discovery and its crew of seven from Cape Canaveral.

It was the first ever July 4 launch of a manned spacecraft.

One of my earliest dreams was to be an astronaut. I had to abandon that dream when I realized that it would involve proficiency in math; yes, much more mathematical prowess than it takes to compute taxes! But I never gave up my love of our space program.

So many of my childhood memories are of NASA accomplishments. I was very young, but I remember listening to John Kennedy urging America to literally shoot for the moon.

I remember gathering around the TV at my grandparents' house with my extended family members on Dec. 24, 1968, to watch and listen to the holiday message from the Apollo 8 crew.

And I remember my parents making sure my brother and I came in from our play outside on that hot July 20, 1969, afternoon to watch the Apollo 11 lunar module touch down and a few hours later see Neil Armstrong set foot on the moon and meet President Kennedy's challenge.

As an adult, I was lucky enough to meet Mike Collins, who stayed aloft while Armstrong and Buzz Aldrin went down to the moon. I worked at the time in Washington, D.C., for a company that did some defense contract work and Mike was part of its aerospace division. Every time I would run into him at the office coffee pot, I would marvel that I was talking to a guy who went into space and helped America become the first county to put people on another planet.

Greenbelt, Md., the D.C. suburb where the hubby and I lived most of the years we spent in the national capital area, is home to Goddard Space Flight Center. Some of our neighbors (hi Charles & Judi!) worked there and I still miss the Center's cable channel, where we would tune in to see what was going on during NASA missions.

And of course, the Smithsonian's Air and Space Museum, with the lunar lander and moon rocks, was a must visit place.

When we moved to Florida, we visited the Kennedy Space Center at Cape Canaveral several times. And we were able to see NASA launches from our yard. Since were were a couple hundred miles south of the Cape, it wasn't quite the literal earth-shaking event it is up close, but the night launches in particular still were spectacular.

And now we're just a few hours away from the Johnson Space Center in Houston, home also to our space-named Astros. We definitely plan to get out there to see both the team and NASA facility this year!

Wow! I actually did not realize how "spacey" (vs. spacy) I was until just now!

So I don't have any problem with my tax dollars going to our space program.

Earlier this year, the House refused NASA's full fiscal 2007 budget request. However, it looks like Senators from my former home in Maryland and my current Texas home are joining forces to push NASA's funding past even the White House's request. Here's hoping they can convince their Capitol Hill colleagues to go along.

And here's wishing the Discovery team a successful mission and a safe return home.

Down to Earth: NASA critics continually question the space program's value in light of its costs. But scientific knowledge does not exist in a vacuum. Many discoveries or processes developed by and for NASA have been successfully transferred to practical applications that benefit us earthbound citizens.

This New York Times article lists some of the "technologies that have made the trip from space to the average home, including smoke detectors and the modern bar codes used on virtually every consumer product."

Also check out this space spinoffs page, as well as Rewards from Space to see what NASA has done for you and me lately. Thanks to Element FYI for the tip to that last link.

Photo of Discovery lift-off from Launch Pad 39B at Kennedy Space Center courtesy of NASA.

I stumbled upon this site as I was in the process of doing some online research. I was initially drawn to your tax info and then got caught up in your memories and support of our NASA's space program.