In early June, I got an e-mail from a reader of the blog. Not unusual. Readers like to write, and I generally enjoy the exchange. 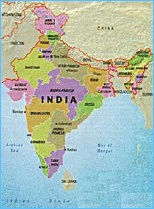 This message, though, was totally unexpected. It was from an accountant in Bangalore, India, who also writes a monthly column for the nation's largest financial daily, The Economic Times.

I was thrilled to hear from someone who actually was logging on from one of the dots in map that I had added to the blog (lower left column). And I was quite flattered as my fellow tax enthusiast-cum-journalist, Lubna, wrote, "Now, your blog is also marked as my favourite. BTW you can check out mine here. Let us say, it is a hybrid blog with tax thrown in for good measure."

Fantastic! A tax-blogging colleague half a world away whose online approach is the same as mine: Write whatever comes to mind with tax thrown in for good measure!

Since Lubna's introduction, we've exchanged messages periodically. And when I heard of the Mumbai bombings, I sent one off to make sure all was OK. Thankfully, it was.

Then, two days ago, Lubna wrote to tell me of the blog blockade that the Indian government enacted. If you haven't yet heard about it, check out this story. While the government ostensibly shut down the writings for security reasons, the blogger consensus within the country was that the bureaucracy could not stand the criticism reflected in many postings after the blasts. Naturally, as writers, Lubna and I commiserated about the move.

Of course, the Internet being the Internet, hackers have stepped in. In this case, it is for good. They've set up sites so that India's online readers can circumvent the ban. MauledAgain, the tax blog through which Lubna found Don’t Mess With Taxes, also writes about the situation here.

Just a few minutes ago, I shared this New York Times story on the Indian blog matter with Lubna, who wrote back to report some good news: "Today's paper says this ban should be lifted soon, except for a few controversial blogs that will remain inaccessible. Let us wait and see."

A wider world outlook: I certainly hope that the blog ban, at least most of it, does indeed end shortly, as the Indian government's actions were a blow to my long-held respect for and fascination with that country.

It began when I was in the fourth grade and Mrs. Kesner decided it was time we small-town West Texans broadened out perspective a bit. My classmates and I were instructed to write a report on a country of our choosing.

The catch: We had to get the information directly from that nation, rather than the World Book encyclopedia volumes most of us had at our homes or from other resources in the school or county library. Thank you, Mrs. Kesner, wherever you are, for making us be resourceful and look at and in places our lives did not normally take us.

I wrote the Indian Embassy in Washington, D.C., and explained my assignment. Within a week, I received a large packet of information. One book in particular still sticks in my mind. It was a slim paperback, its title boldly splashed in white letters on its blue cover: India, The World's Largest Democracy.

That claim can still be found on this Internet page, but India's commitment to democratic principals sadly has been badly battered by the blog ban.

I know the world is a terrible and terrifying place. I appreciate efforts by national leaders to make their countries safe again. But residents of India, the United States and freedom-loving citizens worldwide need to make sure that the price of such efforts, wherever they may be undertaken, aren't just as costly in their own way to the freedom they are trying to guard from terrorist attack.

Principles must be assiduously protected along with our physical wellbeing.

Here's hoping that the Indian government does indeed soon reverse its ill-advised blog ban, getting Lubna and other Indian bloggers and blog readers back online with the rest of the world.

The blog ban has been lifted.

The ban was a mistake, the Government wanted to block only a few sites, and the ISPs in the process blocked entire domains.

The blogspot domains are up (maybe because we made maximum noise for them), but on my ISP I still cannot access typepad blogs, I accessed yours through a proxy! And the problem also exists with accessing Geocities.

Thanks for getting the Indian map right.

Thanks Kay for this write up. Appreciate it a lot. We are back. Well, there are a few technical glitches, for instance, the ISP service provider that I use at home does not have the expertise to ban just a few webpages and hence I cannot browse my fav blogs from my residence. But then, with almost a 14 hour day at work, I can always take some time up to look up your blog and James blog and a few others as well. Yes, we were all very sore because we really felt that a democratic country cannot behave in this manner. Guess, it was a knee jerk reaction and better sense prevailed.