Dealing with the dog days of summer

Summer might be starting to wind down, but some things are still going up. 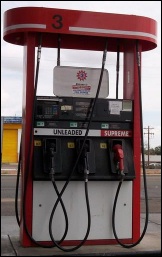 I'm talking specifically about gasoline prices. As I headed to HEB for my weekly grocery shopping earlier today, I noticed that the two gas stations between my house and the store have hiked pump prices in the wake of the latest MidEast troubles.

Regular is back up to $2.95 a gallon, with premium topping the $3 mark for the first time in weeks. It made me look a little more closely at the fuel-rebate products on the store shelves.

Late-summer vacationers shouldn't expect gas prices to drop much. We've still got six weeks until the Labor Day holiday, the official end of summer and the one final travel period that the oil companies can use as an excuse to get more of our money.

To keep as much cash as possible in your pocket instead of ExxonMobil or Shell accounts, check out Money and Values' gas mileage tips for cheaper road trips, as well as this earlier post from yours truly with some fuel-savings factoids.

Temperatures fall … a little: While gas prices have gone up, at least the temperatures here in Central Texas have dropped a bit. Today in Austin we're in the mid-90s, which almost -- I reiterate, almost -- seems cool after the recent plus-100 afternoons. Still, the AC is running at a regular clip.

It isn't, however, on as much as our next-door neighbor's AC unit. That thing, which is on the side of their house that's closest to our bedroom, runs 23/7. Heck, we heard it come on some spring nights when it was in the 50s and we had the bedroom window open. Are they operating a meat market on the side over there?

I'd love to know what their electric bill is like. I'm guessing that a big part of why it runs so much is that the shrubs around it are totally obscuring the condensing units. That's one of the no-no's included in this post on how to keep your AC in tip-top shape.

Dog days dilemmas: At least we have air conditioning. The dog days of summer are not being kind to poor Ditto the Beagle, who is suffering through the heat wave with little mechanical relief. Read the pup's heated travails here. And yes, I know the drawing above is a Saint Bernard, not a beagle, but I liked it!

Ricemutt at Experiments in Finance is trying to keep herself and Lola, her French bulldog, cool, but recently encountered a bit of difficulty, too. She (Ricemutt, not Lola) reports here that there's a run on AC units in the Bay Area, a place that normally doesn't need artificial cooling.

I'm sending out cool thoughts to Ditto and Lola and their human families. Hopefully, we'll all get a much needed weather break soon.

Fetching dog days data: Despite the examples above, the term "dog days" has an astronomical, not canine, source. You can read more about it at Willstar's dog days page; Fact Monster; and Cornell's Ask an Astronomer.

After reading these sites, you can see how you fare over at Mom's Coffee Break and her Dog Days of Summer Quiz.