This day has always been special to me and my family. It was my late brother's birthday. When he was a small child, he thought the flags were put out for him. We let him keep thinking that.

They are still out there for you today, little Bro.

Later, when the hubby and I lived in the National Capital area, we'd regularly head up the Baltimore-Washington Parkway and visit Charm City. One of Balmer's many charms is Fort McHenry (which I mentioned in this earlier post), where Francis Scott Key penned his joy at seeing Old Glory still waving after a night of battle.

It's a neat place to visit. If you're ever in the MidAtlantic region, make sure you get out there.

Tax exemptions for the Stars and Stripes: Many states don't collect sales tax when you buy a U.S. flag. A few that I know about off the top of my head include New York, New Jersey, Wisconsin, Florida and Maryland.

Some states even waive the sales tax on related items, such as flag mounts or poles, as well as on their own state flags.

A Madison, Wisc., retailer got in trouble during the last holiday associated with the flag, Memorial Day, when he illegally collected tax on his store's flag sales. 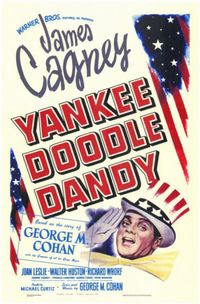 Flag Day history and events: If you can't make it to Fort McHenry, you can take e-trips to several flag-related places listed at American Flag Foundation's Web site.

There are more Flag Day details at Holiday Insights and Flag Day in America.

And be sure to listen to one of my favorite American standards, Cohan's "You're a Grand Old Flag." The site with the the World War I standard recording also has background on the tune, as well as the lyrics so you can sing -- loudly -- along.

Here's hoping that the Red, White and Blue soon will be able to, as the song says, wave in peace for us all again.