Hot hybrids = lower credit, but the boss might help out

No, this is not a car blog. It just looks that way of late. 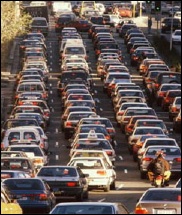 But given the price of gasoline and the new hybrid tax credit, I gotta post every time there's new info.

And today there are two tidbits.

First, if you're considering buying a hybrid, and your manufacturer of choice is Toyota, you might want to head to the dealership this weekend.

No, no one in my family is a Toyota salesperson.

Rather, the maximum Alternative Motor Vehicle Credit, AKA the hybrid tax break, applies only to the first 60,000 vehicles a manufacturer sells. And the Internal Revenue Service review of automaker first-quarter hybrid sales numbers reveals that Toyota sold 41,779 qualifying vehicles. This figure includes Lexus models, since Lexus is owned by Toyota.

As noted earlier, the hybrid vehicle tax credit for vehicles purchased this calendar year could be as much as $3,400 depending upon their fuel efficiency. The credits for the popular Toyota hybrids are:

Hybrid buyers can claim the full credit amount up to the end of the first calendar quarter after the quarter in which the manufacturer sells its 60,000th qualified vehicle. Whew! What that IRS-speak means is that you'll only get the dollar amount listed above if you're one of the first 60,000 hybrid buyers.

At the rate Toyota is selling (and gas prices are hanging in there, especially with the summer driving season just getting underway), the car maker is likely to hit that 60K mark very soon.

So if you want to be one of the lucky full tax credit claimants, you need to consider buying sooner rather than later.

You won't lose the credit if you're not among the first batch of credit-eligible buyers. But your tax break will be reduced.

For the second and third calendar quarters after the quarter in which the 60,000th vehicle is sold, you can claim only 50 percent of the credit. And it keeps phasing down after than until no credit is allowed after the fifth quarter post-60K in sales.

Of course, there are other makes and models of hybrids that qualify for the credit. You can find the eligible Hondas here and the rest of the qualified vehicles listed here.

Now to our second piece of hybrid news.

Hybrid help from the boss: Many of us might want to buy a hybrid for environmental reasons, but our bank accounts prevent it. Sure, the vehicles save gas, but they also cost more than your standard gasoline-only auto.

So some businesses have decided to help out their driving (if not driven) employees.

Bank of America announced this week that some of its employees will get $3,000 cash if they buy one of the fuel-efficient vehicles. The incentive program applies to 21,000 bank employees in Boston, Los Angeles and the bank's headquarters in Charlotte, N.C.

The bank says it will evaluate the program this fall and decide whether to offer the vehicle purchase perk to all 202,000 of its employees.

Anne Finucane, BoA global marketing and corporate affairs executive, told the Associated Press that the program was "enlightened self interest" because it would improve local environmental quality, as well as strengthen the bank's appeal to job seekers and attract new customers by raising its corporate image.

This is just the latest in employer-assistance for workers who commute in a more environmentally conscious way. New Haven, Conn., offers free parking at city meters for residents who drive  ... er, park ... hybrids, while Timberland, the outdoor apparel manufacturer, has created reserved parking spaces for the fuel-saving vehicles at its Stratham, N.H., headquarters to go along with its $3,000 cash incentive for employees who buy them.

Google, based in Mountain View, Calif., offers employees $5,000 to purchase and $2,500 to lease any fuel-efficient cars, not just hybrids, that get at least 45 miles per gallon.

If your boss isn't as generous, but you still do your part to lower emissions by using public transportation, you might check out whether your company offers other IRS-endorsed commuting benefits.

The federal tax code allows companies to provide each employee tax-free transportation fringe benefits of up to $105 a month -- that's $1,260 a year -- to use toward public transit or vanpool expenses.

An employer can cover the cost of the transportation money itself or allow workers to put aside the income on a pre-tax basis as sort of a transit flexible spending account.

There's also a provision that allows employers to provide up to $205 per month for employee parking. But that, of course, sort of defeats the whole share-the-ride, save-the-atmosphere concept.

If your employer doesn't offer either of these transportation benefits, it might be worth at least asking the boss and/or HR office to look into them. You can direct them to this commuter tax benefits booklet published by the Environmental Protection Agency.