Time to prepare for Mother Nature's less maternal side

During this string of hot and dry spring days, it's hard to image that 25 years ago today, Austin suffered a deadly flood.

Austin's Memorial Day Flood of May 24, 1981, killed 13 people, destroyed 600 homes, flooded dozens of businesses and left $36 million in damages in its wake. The picture below shows damage done to a car dealership along Shoal Creek. 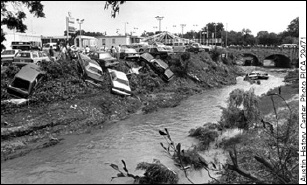 The power of water has always captivated me. Much of the fascination is because I grew up in desert West Texas, where not a stream was to be found.

The only "river" we ever saw was from the occasional thunderstorms that filled up the street where my grandparents lived. It sloped toward the center and obviously city drainage left a lot to be desired. After a rain of any size, the water was over the curbs and my brother and I would stand in Mam-ma and Grandad's front yard, waiting for cars to drive through the miniature lake and push "waves" up to our knees.

Then there was the Ozona flood. The online Handbook of Texas gives it only one line in the page on this small West Texas town: "A flood in 1954 destroyed almost half the town's houses and cost sixteen lives."

That flood was before I was born, but my parents lived through it. As a nosy child, I stumbled across the newspaper clippings about the disaster that my mother had saved. From that day on, I periodically pestered her to tell and retell me the story of how she and my father survived the torrent that came barreling through a normally dry draw.

Though it's been years now, I still remember that yellowing newsprint and its grainy pictures: a car in a tree, trailer houses overturned and mud everywhere. And I still remember the story of the woman who, after the water receded, was found clinging to the top of one of the trees, her clothing pulled off her by the rushing water.

I also vividly recall my mother's tale of how, in her youthful ignorance, she put both herself and my father in real danger.

With the water already rising, my dad rushed home from work to get my mother and take her to higher ground. She, however, refused to go without her trailer house.

My dad tried to reason with her -- "Just get in the car and let's go!" But his young wife resisted his pleas -- "I'm not leaving without my trailer house!"

So he quit arguing and waded into the by-now thigh-high water and struggled to hook the mobile home to their car.

Many years later, each time my mother told me this story, she was appalled at the danger she had put dad, and herself, in. But at the time she was insistent and Daddy was valiant and eventually he got the trailer hitched and was able to haul himself, Mum and their home to safety.

Hurricanes a-coming: The deadly power of water also is on my mind right now because this week the National Oceanic and Atmospheric Administration predicted a "very active" 2006 hurricane season: "13 to 16 named storms, with eight to 10 becoming hurricanes, of which four to six could become 'major' hurricanes of Category 3 strength or higher."

This goes right along with hurricane guru Bill Gray's earlier forecast of 17 named storms, nine hurricanes and five major ones. You can read the full, official report, revised in April, from the Tropical Meteorology Project at Colorado State University (Dr. Gray's group) here.

And while hurricane winds are impressive, not to mention God-awfully terrifying (trust me on this), the real danger of these storms comes from the accompanying flooding in noncoastal areas.

The National Hurricane Center says that "in the 1970s, '80s, and '90s, inland flooding was responsible for more than half of the deaths associated with tropical cyclones in the United States. The numbers from the last 12 years alone:

And thousands more who survived these floods found their lives irreparably changed by the water damage.

Your first concern, of course, is your and your family's safety. After that, though, you need a recovery plan. Flood insurance should be part of that plan if you're in an area that's prone in the least to flooding.

Although flood insurance is relatively inexpensive, most Americans don't purchase the protection. Only about one-quarter of the homes in flood vulnerable areas are insured against such a loss, according to the Federal Insurance Administration (FIA), the FEMA division that manages the National Flood Insurance Program.

I know what you're thinking. FEMA. No way. But this actually is a relatively well-organized FEMA program. In most cases, it doesn't issue the policies. Instead, it partners with private insurance companies to make the coverage available. And if you've got flood insurance, it could help reduce your post-disaster interaction with FEMA.

Today's Tax Tip break: If you do ever suffer through a catastrophe, make sure you also turn for help afterwards to another frequently maligned government agency: the IRS. You might be able to claim some of your losses on your tax return (details here). If you're in a presidentially declared disaster area, you can even amend your prior return if that's more tax beneficial and get possible refund money sooner to help you start putting your life back together.

Flood policies are relatively cheap. FIA says the average yearly premium is around $500. Our Florida coverage cost $330. Look at what you spend in other places, say your cable TV subscription. That connection won't do you any good if your television set is waterlogged.

If you're in a flood area, look into getting a policy now. There's usually a 30-day waiting period before the coverage takes effect, so you don't want to miss out because you waited a day too long.

And you don't have to be a homeowner to get it. Flood insurance is also available to renters. You do already have a basic renters' policy, too, right?

What's your flood risk? At FloodSmart.gov you can learn about floods in general, find out about flood insurance, estimate your policy premium and locate agents in your area.

You can even type in your address to find out your personal flood risk. I must say, however, that I'm a bit skeptical about this online program's accuracy.

I entered our former Florida home's address and was told it was in a moderate to low flood risk area: "Buildings in these zones could be flooded by severe, concentrated rainfall coupled with inadequate local drainage systems."

I'll buy that assessment, and flood insurance, too, which we did. We weren't on the coast, but did have a canal behind our house. In each of the three hurricanes we went through in six years in Florida, that canal rose to within 24-to-18 inches of our back patio.

Our front yard actually fared worse, with the water just eight inches from filling our garage. Of course, that subsided to cover just half the yard once we neighbors slogged out to clear our street's debris-blocked drain. Thankfully, we never had to collect on the flood policy, but I was very glad we had it.

We don't have such insurance here in Austin, even though the interactive flood profiler says -- and here comes my skepticism -- that we also face a moderate to low flood risk in this house.

Huh? OK, we technically reside along the Colorado River (the section dubbed Lake Austin once the dams were built), but we're not right at the riverside.

So giving us the same rating as our former Florida home seems a bit dire, especially since our house is on a hill. We're not on the hill top, but the river would have to really, really rise to get us. Maybe not Noah's Ark proportions, but a lot. 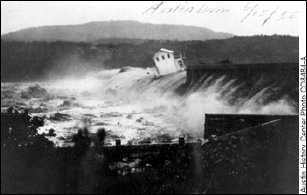 OK, there was the June 15, 1935, flood that occurred after 22 inches of rain fell on Austin in just three hours, but the water management system back then wasn't as sophisticated as it is now.

But then again, it did happen once, as captured in the photo above of a houseboat going over the then Austin Dam.

All right. I'll at least think about flood insurance.

Wow! That is a scary photo. I cannot imagine how awful things would be here in Austin if we didn't have our dams this year with all the rain we've experienced. Yikes! Thanks for sharing this information.