Our first spring in Central Texas has been fantastic.

Early in the season, we discovered bluebonnets in our yard. When we moved into our house last summer, the flowers had long since bloomed and disappeared. Now we're collecting seed pods to spread around the property and help boost the number of gorgeous indigo patches next year.

We also have enjoyed the return of the barn swallows. These graceful birds were here when we moved in, but left for winter. Our garage area has a carport extension that the birds find an acceptable substitute for the bridges where they often nest. Thankfully, they aren't roosting there, but they do take flight breaks and sit along our two garage door frames. Even after we open the doors, some stay perched until we literally get the car's nose inside.

They also rest along the railing of our upstairs deck, so we open windows to hear their chattering and watch them zoom and swoop to catch insects.

We found many shrubs that were simply green when we moved in last summer produce bright red springtime flowers. That means hummingbirds, both ruby-throated and, we think, black-chinned, although we need some more sustained viewing for a positive ID of the latter species.

If we can confirm it, the black-chinned would be a new bird for us, something that's not that easy to achieve since we've seen a lot of birds in our almost 25 years of birding. So we're keeping a close eye on these plants and the humming visitors.

Our backyard also is a haven for wrens, mockingbirds, house finches, house sparrows, cardinals, mourning doves and black-capped chickadees, a delightful little bird that we sorely missed seeing during our South Florida years.

We even had a stray roadrunner, thankfully sans Wile E. Coyote, come cross our back lawn. And at night, in the riverside canyon that abuts our neighborhood, we hear the persistent calls of Chuck-will's-widows, a definite new audio bird identification for our life list.

Our non-avian visitors include the usual suspects: an assortment of lizards in various sizes and colors that sun on our upper deck, back steps and driveway (and, like the swallows, refuse to move until the last minute when we drive up!) and squirrels. Even a small snake, that we can't properly identify since we opted to keep our distance, took a bit of shade relief with the swallows in our carport area. 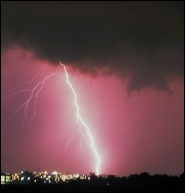 Stormy weather: Spring, however, has its own yin and yang. So along with the enjoyable flora and fauna, we must endure the thunderstorms.

I detailed our first 2006 encounters here, but the season continues. For the last three nights, massive cells have rolled across the region, occasionally dropping a funnel cloud or actual tornado in communities just to our west. And while Florida may have the statewide distinction of most lightning strikes per year, Central Texas is no slacker here.

It's impossible to sleep when the continual strikes make it almost dawn-like. Then there's the incessant rumble of thunder, punctuated with sharp cracks indicating bolts have hit way too close for comfort. (You can find some ways to protect your home from lightning in this story.)

Last Thursday, the first night of this latest storm assault, we lost power for a couple of hours. We had strategically placed flashlights in every room, so we quickly were able to reassure ourselves that we weren't totally in pre-modern times. But it was no fun trying to put batteries in our portable radios and five-inch TV so we could maintain some contact with the outside world.

The storms reinforced what we already well knew: Mother Nature's power is not limited by geography. She can whack you wherever you live and in any season. So it's best to be prepared.

And I realized that our hurricane experiences actually could pay off here in the Texas Hill Country. Although we might not need quite the extent of supplies as we did in Florida, some of the prep suggestions are definitely transferable. Just ask my fellow Austinites who've been without power since Thursday night.

Some handy storm readiness ideas include:

Financially weathering a storm: But getting ready for the actual hit is just part of the planning. You also must take financial storm preparation steps.

In the short term, especially if you live in an area where a hurricane or tornado can cause widespread damage that's likely to incapacitate whole communities, it's not a bad idea to have a small stash of cash on hand.

This is, of course, easier with 'canes, where you get more warning. But in Tornado Alley, during the spring storm season you might want to have $50 or so bucks handy. That way, if the store you visit for post-storm staples has lost electricity and can't process credit card purchases, you can still pick up what you need.

Also get some change in case the only available communication outlet is a pay phone.

Just be sure not to carry too much cash around. From a safety standpoint you'll be a prime target for thieves. From the financial perspective, you'll lose interest on the withdrawn cash.

Now it's time to make longer-term financial moves, well before a storm hits.

Evaluate your insurance policies: Do you have enough coverage? Do you know exactly what it does and doesn't cover? This means your home as well as any policies for your car or a boat. They are just as, if not more, at risk.

And don't forget about your life insurance. If the worst does happen, you need to know that your family will have adequate resources.

Inventory your possessions: This, of course, is a good step any time, but it's particularly helpful if you have to make a claim. Supplement your written list with photographs or a video record.

Include exterior property, especially if you've made substantial home improvements such as a new patio, fencing or major landscaping.

And don't forget items in your basement or attic. Even though you're not using them, they must have some value to you or you would have disposed of them instead of storing them.

If you put the list on your computer, back it up onto a portable flash drive so you can access it from anywhere.

Find a safe place for your financial records: Originals should go in an off-site place, such as a bank safe deposit box. These documents include insurance policies, birth and marriage certificates, auto titles, property deeds, wills and living wills and medical records.

Put your and family members' passports in here, too, as well as your written and video inventories in the box.

Make a list of your bank account, loan, credit card and investment account (brokerage and mutual funds) numbers and drop it in here, along with drivers' licenses copies.

But before you lock these documents away, make copies that you can keep at home and get to quickly in a storm's aftermath.

Establish an at-home emergency box: Your personal financial data copies go here. This could be as elaborate as a small portable safe or as simple as a plastic file box. What you're looking for here is a container you can grab and carry when you have to move to a safer place. You also want one that offers some added protection for the items in case you're forced out into the weather.

In addition to the copies of all the original financial records you place in your safe deposit box, your at-home emergency box should include:

-- A safe deposit box key. If you have multiples, put another on the key chain you'll keep in your pocket.
-- A list of your family members' Social Security numbers.
-- A list of insurance company telephone numbers.
-- Your copies of your last three years tax returns. These will be crucial if you file a casualty loss claim on your next return or amend your current one.
-- Your personal copies of lists you placed in the safe deposit box, such as your account and credit card numbers, drivers' licenses and medical prescriptions.
-- A list of family emergency contacts.

If you don't want to carry your emergency cash in your wallet or purse, stick it in here, too. And you might want to buy a prepaid disposable cell phone to stick in the box as a back up.

True, it will take some time to get your financial storm preparations made. But once you're done, it's easy to simply update and refine things in years to come.

And you'll definitely be glad you were ready if Mother Nature takes aim at you.