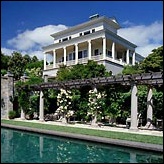 Forbes magazine has put together its annual list of the 10 most expensive homes in the United States.

That's the backyard of one of them there to the left.

These places are not just expensive, they are extravagantly, excessively, almost obscenely (to those of us who can't afford them!) expensive.

The magazine puts it this way:

We're not talking about "luxury" custom homes, high-end subdivisions or fancy new glass-curtain condos. These are the most expensive residences in the country, with prices so astronomical that only a very small handful of very wealthy people could even dream about owning them.

Forbes has put photos of these houses into an online slide show (link in this story; free registration required). It's no surprise that nine of them are in New York (the city and elsewhere in the Empire State) or California.

But the absolutely most expensive U.S. home, which gets its own separate video at Forbes online, is a $125 million mansion on seven acres at the north end of Palm Beach, Fla.

The 80,000-square-foot French Regency-style estate includes a main house with 18 bedrooms, 22 baths and "amazing ocean views" throughout. For that price, you'll also get three guest houses and a 100' x 40' swimming pool that overlooks the Atlantic.

The place isn't perfect, though. The new owner will have to put in the chandeliers.

The new owner? Yep, the place is for sale. But the current owner will be your neighbor down the road at Mar-A-Lago.

Yep, again. The country's most expensive, and for sale, property is owned by the man with country's biggest ego, Donald Trump. (And if you take the Mar-A-Lago "tour" linked above, I suggest you don't dwell on slide #8. Eww!)

Got a bulging bank account and the fortitude to put up with The Donald coming down to borrow a cup of sugar? Then the place in Palm Beach can be yours!

Gawking at gazillionaires: When we lived in Palm Beach County, we'd take trips over to "the island" to get close to the opulence. While the homes obviously have gates and, in some cases, dense shrubbery restricting the hoi polloi's prying eyes, in many instances you still can get a pretty good look at the personal real estate holdings of the very rich.

And yes, we slowed down -- halting even when traffic along Ocean Boulevard allowed -- when we drove by Mar-A-Lago.

We also wandered Worth Avenue, window-shopping only. But we did once pony up for the most expensive dinner we've ever had -- around $250 for just the hubby and me --- at L'Escalier, the renowned restaurant in The Breakers.

It was our 20th wedding anniversary and we figured since we'd put up with each other for that long (longer, actually when you count our courting days), we deserved a treat. And that price did include appetizers, desserts, a nice bottle of wine and, of course, taxes.

Just for the record, all subsequent anniversary meals have been at Kay's Cocina!

No concern for wealthy whiners: Yes, Palm Beach, island and county, can definitely be pricey. And it has its share of quite wealthy winter-only residents.

It's that reputation that prompted Vernon Effenberger, after reading about Florida's separate property value assessment policy for seasonal residents, to e-mail me the following:

With all due respect, your last column seems to pander to the bourgeois elite.

Boo hoo. I couldn't be less unsympathetic to those who complain about the taxes on their second home. I wish I had that problem. Come to think of it, there are many of us who wish we could afford one home, much less a vacation home.

You're fortunate enough, by birth or by sweat, to be part of the wealthy class. You can afford such luxuries as a vacation home. But did it ever occur to you that you might have to actually pay for that privilege?

I'm always amazed at how the rich can openly complain about things like the capital gains tax, the infamous "death" tax or property taxes on vacation homes when there are families mere miles away living on food stamps who can't afford the most modest of health care or education.  That takes some brass, Richey Rich.

For those considering a vacation home to shake the stress of their upper-class lifestyle, I propose these quaint little pieces of real estate. (I bet you can pick 'em up for a song and dance, too!) Instead of lamenting away the winter in an "oh-so-burdensome" vacation home in Florida, spend those frigid months in East Harlem or the nearly hopeless Cleveland or perhaps Newark.

See how those people live day-to-day. It crushes the spirit. Then compare their daily struggles with your tax frustrations.

Embarrassed yet? If not, you ought to be. People who can afford to buy second homes - especially those who actually buy them - need to quit their bitching about how they're getting screwed. There's a very long line of people who get to complain about that.

And, guess what? They all deserve to be ahead of you.

Vernon was kind enough to append a P.S. letting me know that he wasn't lumping me, personally, in with all the arrogant, whiny rich. He was using the universal "you." I appreciate that, since I'm neither rich nor, in my estimation at least, overly whiny.

But he makes a good point. I suspect many other readers immediately presumed that it is primarily rich second-home owners who are getting popped with property taxes many times higher than those of year-round residents. That's not always the case.

The Wall Street Journal article that I referred to regarding Florida's unequal property taxes cited, in part, less wealthy folks from northern environs who spend their winters in their Sunshine State mobile homes.

In one example, a permanent Floridian's property tax on his trailer house was $271; the tax on his part-time neighbor's almost identical mobile home was $3,007.

Of course, snowbirds of the Rockefeller ilk also see similar differences in their multimillion dollar second homes. I tend to agree with Vernon when any of those folks start whining.

But when it comes to septuagenarians who are just looking for a few months out of the cold in an $8,000 trailer in Winter Haven, well that's, as Emily Litella would say, "different. Never mind."

And I was remiss in not at least mentioning the broader spectrum of second-home owners and their taxes in my blog entry.

But I was more concerned with Florida's two-tier taxing method and its inherent fairness or unfairness, depending upon your point of view and bank account. I am, admittedly, a tax geek and sometimes the process itself does inordinately fascinate me.

I probably should have elaborated on some of the actual dollar amounts, at both ends of the second-home tax scale, since most of us can more easily more relate to such figures.

Sure, I put in the link to the WSJ story, but access to it does require a paid subscription, so that makes it unavailable for some readers. Others just don't want to read further, especially after they've already put up with as much verbiage as I, alone, give them in my postings!

So thanks, Vernon, for reading, bringing up the issue and giving me a chance to elaborate and, I hope, clarify it a bit here.

Occasionally, I have some sympathy for snowbirds who complain about the two-tier tax system. But not always. Two observations:

1) People who can afford to own vacation homes tend to be more conservative than your average human. These conservatives are market worshippers. They believe that market forces are more democratic, fairer and more honest than the ballot box. The market supports high property taxes on vacation homes. Therefore, those higher tax rates are fair.

2) Florida has to build infrastructure for the entire year, not just for the summer. We would have narrower roads, smaller-capacity wastewater treatment plants, and fewer hospitals, firefighters and police officer if the state's population didn't swell so much for four months every year. Part-time residents need to pay for that.