A lot of people think of Congress as a circus, and the tax bill approved last week by the House and Senate sure gives credence to such a view.

Now I'm not calling our esteemed Representatives and Senators clowns … 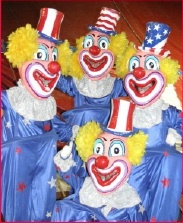 Most of them, and by most I mean primarily Republicans (they are in charge now), certainly looked silly as they pandered to special interests instead of considering the needs of the majority of their constituents and the country as a whole.

They spent months -- months -- trying to find a way to continue a provision that (a) would still be on the books for two more years even without their intervention, but (b) ignored tax breaks that have Congressional and public support but officially ended on Dec. 31, 2005.

Part (a)? Making sure that lower tax rates for capital gains and qualified dividends are around for a few more years. This is an area of great importance to more well-to-do taxpayers.

Part (b), on the other hand, includes numerous tax breaks that were utilized by more middle-to-lower-income filers.

I know we all get our priorities messed up now and then, but this is a disturbing pattern. I'm not just talking about the disregard of more pressing legislative matters. I'm talking about the predilection to ignore a large, and poorer, segment of taxpayers in order to take care of folks who are doing pretty damn well already.

My arms are getting awfully tired from beating this dead horse, which I whipped pretty good here last week.

But I felt compelled to mention it one more time, since today the three ring circus that is our current legislative system will be complete when House and Senate supporters show up to watch the president sign TIPRA into law.

I guess that's why I keep seeing in my mind's eye all those lawmakers pouring out of the Capitol and cramming themselves into a tiny little car for the trip to the White House signing ceremony.

Piling on: Some other Washington watchers also have issues with the way Congress is doing, or not doing, its job.

Check out today's Boomer Bucks column by Bankrate's Barbara Whelehan. She finds further evidence of Washington's current proclivity to reward the wealthy at the expense of the poorer in her examination of a law that's been waiting not just months, but years, to be updated, the minimum wage statute.

Then there's the assessment by Joe Kristan of Roth & Company of TIPRA as "a better train wreck."

And Dan Shaviro at Start Making Sense predicts that the president will hail TIPRA while simultaneously "grandstanding about how demanding a $20B cut (over 5 years?) in a pork barrel spending bill makes him a deficit hawk." I suspect Dan's definitely onto something here.

(Thanks to TaxProf for the roundup of articles about this tax bill.)

According to Infoplease, on this day in 1792 the New York Stock Exchange was established when a group of 24 brokers and merchants met by a tree on what is now Wall Street and signed the Buttonwood Agreement.

Richard Hatch, the first "Survivor" millionaire, is heading to federal prison for the next four-plus years after his January tax evasion conviction. If you haven't offered your opinion on Hatch's sentence via the poll at the top of this page, please take a sec to do so.

My favorite part of the sentencing? When the judge said he handed out a stiffer-than-expected jail term because Hatch lied so blatantly during his trial.

My second favorite part of the sentencing? Reality TV's original "naked fat guy" appearing at his formal sentencing in a prison-issue orange jump suit. It's been his daily attire since the verdict, when he was detained because he was considered a flight risk.

My favorite related incident? When show host Jeff Probst reminded this year's winner, Aras Baskauskas, to "pay your taxes," an obvious swipe at Hatch who had claimed CBS officials told him that the taxes on his winnings were taken care of by the network.

I'm tired of the "taxcuts for the rich" line ... Basically, if you are gonna cut taxes, you will give a break to the people that pay them. When you consider that the top 1% pay over a third of all federal tax, and the top 50% (the affluent!?) pay about 97% of all federal tax, well, that's where the cuts will go. Mind you, I ain't happy with the tax code, and you are absolutely right: it tries to please too many special interests.