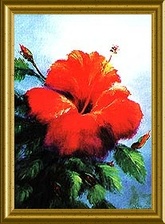 Well, technically, I guess we were still partially packed. All of our artwork has remained in its moving boxes, stacked in our dining room. I guess it's a good thing we decided to donate that old table, chairs and breakfront to Goodwill before we headed westward, or it would be really crowded in there!

This last weekend, though, I got energized. I opened up the 18 mirror boxes and started pulling out the 45 large pieces of framed art they held. Yeah, that husband of mine is a heck of a packer, able to carefully cram stuff into containers meant to carry 2½ times less. And that doesn't even include our two dozen or so smaller paintings, still stacked in two large regular shipping boxes.

I know, I know. That sounds like a lot of pictures. OK, it is a lot.

But we've been collecting these pieces for half our adult lives and all of our marriage. Most are the work of Robert Bateman, a fabulous Canadian wildlife artist, author and environmentalist. I still remember the first Bateman we bought.

We had just relocated to Washington, D.C., and were exploring the northwest section of the city when we came upon the Snow Goose Gallery. We walked into the shop and were immediately captivated by a depiction of orcas off the Pacific Northwest Coast.

The locale had no special meaning for us. Birds, not marine mammals, were (and are) the wildlife that fascinated us most. And we definitely, or so we thought, were "just looking" that day. But suddenly we felt like we were watching these spectacular animals from one of the San Juan Islands. The spray from the orcas, the water, the fog, the gulls hovering over the pod. I swear, I thought I heard a lighthouse foghorn!

No, we didn't buy it that day. The price tag was almost as overwhelming as the art itself. But we did buy a smaller Bateman, a grebe, for a 10th the price. And a few days later, we realized we really, really wanted that print, went back to the gallery and maxed out our credit card. It still is one of our favorites.

An obsession was born, and we've been filling up the walls of every home we've had with Batemans and Solbergs and Florida Highwaymen and my grandmother's oil paintings and whatever else captures our eyes and hearts.

It's nice to see our art (most of it anyway) again, even if it's just propped up against walls awaiting the arrival of hammer and nails. That's enough to remind us of what we were missing.

And I suspect now that we've uncorked the art bottle again, it won't take too long to get back in the swing of things here in Austin. To be honest, the cork wasn't in too tightly anyway.

In only our second week back in Texas, without a wall to hang it on, we bought our first official "welcome back home" piece, a Guy Juke drawing, from the South Austin Museum of Popular Culture. And we've been talking for months about getting something more "Texan" to go over the fireplace in our new home's den.

The only downside of this weekend's re-establishment of our own personal gallery is the mess. The dining room is a disaster area again, full of cardboard box pieces and whole cardboard boxes. And the debris of packing -- crumpled newspaper, Styrofoam popcorn, bubble wrap and old financial statements that were shredded and then used as packing material -- is inches deep.

I'll get it cleaned up eventually. Or my sweet husband will do it. Not that I'm passive-aggressive or anything to get him to do it. He's just a bit less tolerant of disarray than I am. That certainly was a wonderful thing to learn after we married. An even better post-I-do surprise: He puts up with my messiness!

Sooner or later, though, either by my efforts, or the hubby's or both of us, the place will be clean. And our house will be filled with our old art and new art and really, truly feel like home.

TODAY'S TAX TIP: I hope that by the time I get our taxes done, which looks like it will be at the April 17 deadline, the unpacking if not the hanging of our art will be complete. It would be kind of ironic (is that the proper word, Alanis?) if I'm claiming a tax deduction for moving property that I'm not even fully utilizing!

Artist recognition: The "painting" at the top of this post is a hibiscus by Harold Newton, one of the more famous of the Florida Highwaymen. No, we don't own that one. But Newton's colorful flower is a nice representation of the group's style. If you ever get a chance to see an exhibit, go. Or you can read about (and see more photos from) this art movement in Gary Monroe's book.