This weekend, Austin's premier annual event, the South by Southwest Festival began. So what did we do?

Last year, when we returned to Texas in May and missed out on SXSW by just a few weeks, we bemoaned our bad timing. Next year, we said, we'll hit the festival next year.

Then we realized just how big this sucker is! Tens of thousands of people pile into the city for 10 days to observe, participate and enjoy the many aspects of music, film and interactive media.

The 4,000 admission wristbands made available in advance for purchase by locals disappeared in a few hours. And word was that pre-registration for the event was running well ahead of past years. Whoa! Hold on, bucko! Part of the reason we came to Austin was for access to innovative cultural offerings like this, but without all the big-city hassles.

Viewed close up, we began to feel like SXSW was smack dab in the middle of some huge, body-to-body metropolis. And we hadn't even started to contemplate parking. 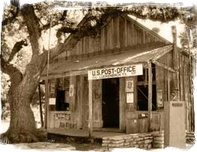 So we headed about 85 miles west to Luckenbach, Texas.

Yeah, that Waylon and Willie and the boys place.

Bandera native and still resident Charlie Robison played there Saturday night and, being fans of Charlie's irreverent music, we thought this a great opportunity to catch him live. We originally planned to see him Helotes in April (and we may do that, too), but since we were just there in late December (read all about it here), we decided to catch Charlie earlier.

Plus, it'd let us get a look at Hondo's world-famous creation and bring to three our total of historic Texas dance halls: the Broken Spoke (blogged here), the aforementioned Helotes and now Luckenbach.

We arrived early, so as to make sure we knew where we were going and to pick up our tickets (or, in this case, wristbands) well before the show, and then headed into nearby Fredericksburg to scope out that historic German settlement. More on the town tour in a future posting. Suffice it to say now that a place where B&B means Bed and Brews as well as Bed and Breakfast has its charms.

But back to Luckenbach. We didn't realize it was still such a tourist draw. The place was jammed with bikers, both the Lance-inspired spoked variety and South Austin Harley Club members, as well as families who arrived via buses sporting "Texas Hill Country Tour" T-shirts.

We wondered how many of these diverse visitors would be around in eight hours for Charlie's show. Actually, not that many. But it still was a full house.

The bouncer regulating entry into the hall told us that dancing would probably be out of the question by the time Charlie took the stage, as 400-plus tickets were already sold, meaning the audience would quickly spill over from the limited bench seating around the hall's periphery.

We were glad we were at the front of the line and could grab a couple of bench spots, as I planned to sit and drink Dos XX more than dance.

Side note: What does it mean when the bouncer has a black eye? Did the other guy look worse? At least it obviously happened a few days earlier so, we hoped, it wasn't from a Charlie fan who might raise a similar ruckus tonight.

Two other bands opened, the MacKay Brothers and Jed and Kelley. The MacKays, also from Bandera and regular performers at Luckenbach, knew what to expect. But Jed and Kelley, visitors from Memphis (Tennessee, not Memphis, Texas), were definitely taken aback by people dancing during their songs. It's a dance hall, guys! A few more gigs in the Lone Star State and you'll get used to our love of the two-step.

Dancing, however, was not on the minds of most of Charlie's fans. When he took the stage, they crowded into the front two-thirds of the hall for close-up sing-alongs and beer raising salutes to their favorite Charlie tunes.

It was a fun show, two solid hours of most of his hits (although I wish he'd sung "Right man for the job") and a rousing rendition of the intoxicating (in many senses of the word) paean to nursery rhymes, "Barlight."

A group of our fellow Charlie fans had one more dance at the back of the hall, then we shut down that saloon.

Miles and miles of Texas: Yeah, I've used that tag line before, but it fits here, too, since we drove around 250 of them to, from and exploring the Fredericksburg area. Not the smartest move, given that spring break has begun and gasoline prices have spiked accordingly.

I understand the profit motive of business, but I was stunned at the pump prices posted at some of the stations we passed heading out of Austin. $2.49 for regular! Since I work from home, I only have to buy gas once a month or so and the last time I did, it was just over two bucks.

People don't seem to be griping like they were even a year ago. It seems that once the two-dollar barrier was breached, people just gutted it up and filled 'em up and moved on, literally. Guess I need to get out of the house a bit more often!

While corporate quest of the highest dollar is a main reason for the price of gas, taxes also add to the cost. This map from CCH shows the 2005 state gas tax rates. Remember: local jurisdictions (counties, cities, etc.) might tack on a few more cents.

Another tax reference firm, RIA Thomson, details how those local levies come into play in the 2006 edition of its "All States Tax Handbook." Washington state is shown as having the highest state gas tax at 31 cents and it's going up to 34 cents on July 1. But the county of Maui in Hawaii (yes, the tropical islands are counties) is already at 34 cents and nearby Honolulu is at 32.9 cents.

The one good thing about gasoline taxes, notes RIA Thomson, is that the gas tax is generally deductible (since it's included in the price you pay at the pump) if you use your vehicle for business purposes. Check out these tips from the National Association for the Self-Employed on writing off your car costs on your next business tax return.

Addendum March 16: This post is part of the latest Carnival of Entrepreneurship. Check it out for a variety of business tips from entrepreneurial bloggers.

Addendum March 17: This post was included in a second compilation, the latest Carnival of Cars. Check it out for all your automotive blog needs.

Hi..just stopping by to say a Happy New Year...interesting post there, and i've bookmarked this blog too...keep up the good job ;)

It appears those blogging carnival thing's certainly do work, I came across your writings this morning thanks to you contribution to on Dane's Business Opportunities blog.

The vehicle miles deduction issue used to be but a minor part of taxes, but a lot of entrepreneurs need to rethink things now, with deduction rates running at 48.5 cents.

Two years ago when I went into private consulting, in spite of half-hearted efforts to keep one of those little tax log booklets in my car current I wound up at the end of the year with about 3,000 miles unaccounted for. My choices? Lie, or give the miles away ... so I took the high ground and just didn't claim them. In this tax year that would have been about $1300 or $1400 off the top, had I but kept better records.

I'd like to recommend self-employed folks look carefully at the GPS tracking market. A little 'black box' that can spit out contemporaneous spreadsheets of mileage and lists to prove the destination/purpose of the miles can be bought for as little as $295. ($500 is about the right price for a good system). Do the math, the unit itself should be deductible and your ROI in the first year could easily be 3 to 1. $500 one time to net $1500 a year?

Technology for technology's sake is silly, but technology that both simplifies life and gives a great return is worth looking at.