I'm not one of those women who dreams her man flirted (or worse) with some other woman and then wakes up all angry at him for what happened in her nightmare.

No, that's just not me. Plus, I don't tend to have those sorts of dreams.

Unfortunately for me, my dreams wander to more esoteric, some (like my hubby, whom I cut so much dream slack) might say even geeky areas.

Regardless of what they're about, I know dreams are just a way for the brain to sort out all the disparate information it took in during the day (or days) before.

Unrelated occurrences and people (sometimes people I don't even know!) somehow end up in a bizarre mélange of time-distorted episodes. Most of the time, I can see immediately what prompted the surreal nocturnal escapades.

My brain must have a lot of crap to sort, because my dreams, in addition to being on rather obscure issues, tend to be pretty elaborate. Maybe that's why I wake up tired so often.

Restfulness or lack thereof aside, I'm convinced some of my overnight scenes could be stitched together to make great TV programs (I'd say movies, too, except they're usually not long enough to sustain a feature film). Sometimes they even have natural breaks where the commercials could go. This, obviously, is a result of watching way too much of the boob tube in the first place.

Last night's dream, while probably not worthy enough to storyboard for a network executive, was nonetheless pretty interesting (at least to me!).

I was at a doctor's office. I don't know what kind of doctor or even why I was there, although I suspect the dream was prompted by complaints earlier in the evening of a nagging back pain. My husband said "go to the doctor" and I said "I'm tired of doctors," having finally just finished last week the round of follow-ups from my initial consultations back in November that I wrote about here.

Or maybe I was still hashing out the latest "Grey's Anatomy" twists. When, when, WHEN is McDreamy's wife going to leave town? And I can't believe Meredith is going to break George's heart like that!

Anyway, I was getting ready to leave the doctor's office when a nurse came out and told me I needed a new Social Security number. Apparently the doctor's office administrator had decided it would make her job easier if she could just start from scratch with my records, new tax ID included.

I was mystified and more than a little dubious, but not wanting to make trouble -- yeah, yeah, I can hear, even over the Internet, the chorus of laughter from everyone who knows me and loves me for my trouble-making ways; the ROTFLOL is being led right here at home by my loving husband -- I said OK.

I sat down in the crowded waiting room and in a few minutes the nurse came out with my new Social Security card. I don't remember all nine digits, but it started with 084. I know Texas numbers start with 4 (or they used to); if you know what region begins with 0, let me know.

Then the real me appeared. "Wait just a minute," I told the nurse. "Let me talk to your business office." I marched in there and lit into the woman who so wanted to reassign me a new official identity.

I proceeded to tell her (and three other people who were in there) that (a) despite the new card I was handed, they had no authority to give me a new SSN, (b) I just finished not a month ago getting errors on my credit record associated with my old number cleared up (hassles detailed here), and (c) my life was much too complicated and dependent on the number that I've had since my teen years to change it now.

There was just no way I was going to recreate my online bill-paying system under a new ID! 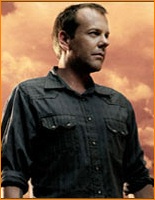 I also was sure these medical office employees, none of whom looked familiar, gave me a new SSN so that they could use my old ID for something nefarious, probably terrorist-related.

This obviously was inspired by the derring-do just a few hours earlier of Jack Bauer on "24." I love the rogue Jack. Don't go back to CTU, Jack! Get Tony out of the hospital and y'all go out and save the world sans worthless bureaucratic bosses!

Speaking of which, who's with me in thinking that the new Hobbit CTU director is probably one of the "higher in government" guys that Nathanson mentioned before he was gunned down? But I digress.

To cut to the dream's chase, I prevailed. I think the tide turned when I told the office manager that my medical insurance was keyed to my old SSN, so if they wanted to get that payment, they'd better leave my ID number alone!

Then I woke up.

Yeah, like I said, not exactly the pilot for a new fall show. And I've yet to determine why I felt the need during REM sleep to address my tax identification number.

Maybe it was because I've finally started sorting through the collection of documents I'll need to do my return. All those papers with my good, old, familiar SSN on them. Or maybe I felt a need to come up with a blog hook for TODAY'S TAX TIP, which is make sure your Social Security number is correct on all your tax-related documents and especially on your 1040.

If you transpose the number, the IRS will kick your return right out. The same will happen if you have a wrong SSN for a spouse or dependent. Your whole return could be rejected or a credit or deduction related to the person with the questionable SSN could be nixed.

So write it down correctly on your tax return, guard your SSN from prying ID thieves (like those conniving medical office employees!) and here's to happier, more relaxing dreams tonight.

Wow, you actaully brought that all the way around to a tax-tip. Bravo, madam. (Battlestar slow-clap)