It’s a brand spanking new 2006. Are you ready? More importantly, have you recovered yet from ringing out 2005?

Our celebration was great. As usual, we sat at home to watch the ball drop in NYC on television. At least this year, living in the Central time zone, it happened at 11 p.m. and we actually saw it! We watched it again at our midnight and got a laugh out of the tape delay references to the “live” ball drop. Serious déjà vu.

Truth be told (and I do want to be honest with you, my loyal blog readers), we had our year-end bash a few days early. Two of our favorite Texas singer-songwriters were putting on a show at La Zona Rosa on 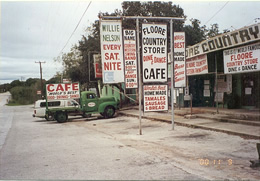 12/31, but we decided to travel a couple hours down the road and two days early to catch their dress rehearsal in Helotes.

The headliner was Joe Ely, the grand troubadour of the Texas High Plains. We’ve been Joe fans since our Texas Tech days. Lubbock was one of Joe’s early stomping grounds and his influence was felt mightily there, at least among our crowds. I use the plural since my husband and I didn’t date in school, but met later on-the-job in the Hub City.

In those post-college years, my husband was instrumental, organizationally rather than musically, in helping put together the city’s legendary Tornado Jam concert that in its early days highlighted Joe and other West Texas music cognoscenti.

The Jam’s music was great, but I must admit that the most memorable event was the Rolls Royce that somehow ended up in one of the playa lakes (the story above calls it a river, but I swear it was a little lake) that dotted the park where the event was staged. I was standing no more than 10 feet away when the thing starting rolling and it was a sight to see such a car submerged to its windows. Ah, good times!

Patricia Vonne, an up-and-coming San Antonio native who’s been wowing ’em in Europe this past year with her brand of Tex-Mex rock ’n roll, was

Joe’s opening act, even though this “wasn’t no wine festival” (this story explains). When I first became aware of Patricia, I didn’t know about her connection to Joe and how much he helped her get started. That association just turned out to be a bonus.

Rather, I became a Patricia fan after hearing a snippet of her song, “Traeme Paz,” in the movie “Once Upon A Time In Mexico.” Listening to it in full on the soundtrack sent me searching for the singer, and I’ve been walking the fine line between fan and stalker since. Just kidding, but it is a fabulous song and is included on her latest CD, which also has a great tune, “Joe’s Gone Ridin’,” a fun homage to Ely. And the first live show we attended after moving to Austin (note the list along the lower left side of the blog) was Patricia and band at the Continental Club.

Anyway, since Joe and Patricia were going to be together, it was too good an act to miss. Even better, we could enjoy them on Dec. 29 without the New Year’s Eve chaos and get to see them in one of Texas’s

historic musical venues, Floore’s Country Store. Click here to catch a clip of Willie Nelson singing “Whiskey River,” then click enter and then the history tab to read about how the establishment came to be (and see a hilarious photo of a young Willie).

As soon as we walked into Floore’s, we realized we were not in Austin anymore.

It wasn’t just the building. To be sure, the state capital has its share of relatively ramshackle bars and clubs. Heck, such settings help give Texas honky tonk its distinctive sound.

The big difference was that smoking was allowed, unlike in Austin where voters decided last year that clubs would be cigarette-free zones. Thankfully, the smoke wasn’t as bad as we originally feared.

Maybe the several Dos XX (and half my hubby’s Shiner Bock) I enjoyed throughout the night dulled my perception of smoke.

Maybe, since it was an unusually warm Hill Country night and the patio doors were kept open, much of the smoke escaped that way.

Maybe there simply are fewer smokers nowadays. I don’t doubt that, given what they cost, due in no small part to the state excise taxes tacked on each pack.

Or maybe it was because some of the smoking definitely was done in a less public place because, in addition to regular cigarettes, another non-taxed and unregulated tobacco product also was being ignited. Hey, Willie did help get this place going after all!

Whatever, it sure took us back to our college days, and we’re not just talking tobacco here, although I was a two-plus packs per day smoker and occasionally ignited alternative product. No, it was the whole experience, including the guest appearance in Joe’s band of steel guitarist Lloyd Maines.

Lloyd is probably better known among the younger crowd as father of Dixie Chick Natalie, but he’s a respected musician and producer. We still remember him as one of the Maines Brothers, with the group’s “Route 1, Acuff” vinyl LP still in our collection to prove we knew him back when.

But the star of the night was definitely Joe. And the pro-Joe crowd was not disappointed.

He fittingly started with “All Just to Get to You,” then mixed it up with songs from across his decades of roadhouse rock. He does a mean “Dallas,” written by fellow Flatlander Jimmie Dale Gilmore, and although it was written by Robert Earl Keen, Joe truly makes “The Road Goes On Forever (and the party never ends)” his own.

Of course he sang the bluesy “Boxcars,” penned by the third Flatlander Butch Hancock, “Road Hawg” and many others before closing with “Cool Rockin’ Loretta” (joined on stage by the castanet-wielding Patricia).

The true crowd pleaser, however, was Joe’s “Me and Billy the Kid.” Pat Green might have covered it (I didn’t know that until Joe made a joke about it), but no one lives a song, and this one in particular, like Joe. With each “never got along,” all of Helotes was yelling (not singing) along.

Of course, we would have liked the show, like the road, to go on forever, and I missed “Dam of My Heart,” “Fingernails” and “She Never Spoke Spanish to Me,” but neither Joe nor we had days to devote to his discography (dang it!). All in all, it was a great show and a great time.

And thank goodness we had plenty of his CDs to make the drive back home speed right along.