Baby, what a face

No offense to young mister Sean Preston Spears Federline, but the cutest baby in the world right now has to be Tai Shan, who celebrated his six-month birthday yesterday.

Tai Shan is also the hairiest kid out there. But his face is definitely one that everyone, not just his mom Mei Xiang, loves. 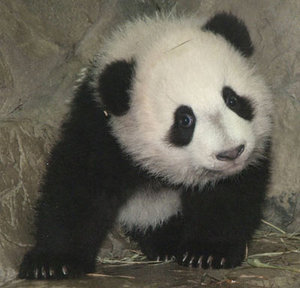 Institution's National Zoo in Washington, D.C., Tai Shan is the undisputed king of the nation's capital. Everyone adores this fuzzy little fellow. And what's not to love? I mean, just look at that mug (courtesy of the Smithsonian's panda photo gallery). He is a true charmer.

When he made his public debut back in December, all available tickets for the first showing were snatched up in a couple of hours. The tickets allotted to allow visitors to glimpse Tai Shan in his outdoor recreation area through the month of January are already gone.

The Zoo, in an effort to appease Tai Shan's fans, is issuing a limited number of tickets to see him in his indoor habitat. And there is the Web cam, although I haven't yet been able to connect yet, despite the site's assurance that video admirers are only allowed a 15-minute viewing segment so as to free up the bandwidth for other panda maniacs.

I did get through via the companion Animal Planet camera, but the little bugger must have been hiding behind the rocks. All I saw was a messy room with a couple of toys strewn around.

Poking my head back out now that all the parental brickbats have been hurled. Hey, do your worst. I'm used to it. Heck, I irritated a few moms and dads just a couple of days ago when I took a blog swipe at overly preening parents.

On a more personal level, I once complained to my grandmother that our boy Zeke's picture wasn't up on her wall full of photos of grand and greatgrandkids. I was hurt, I whined, since he was her first greatgrandson.

Of course, the fact that Zeke was our cat might have had something to do with his missing snapshot.

I was joking (sorta, mostly, well, not really), but my Mam-ma always gave as good as she got. The next time I visited, there was Zeke's furry little mug amid those shots of his bipedal "cousins." Some of my human relatives were not amused, but I always appreciated my grandmother's sense of humor and fair play.

I'm not alone in treating a pet like child. It's a very common trait of people who are owned by a cat or dog or other animal that controls an ostensible owner's life. And pets can cost you a pretty penny, too.

But even I must admit that there's nothing that compares to the cost of raising a child.
Modern Day Dad, a stay-at-home father and blogger, examines some pricey scooters for his daughter. And over at Baby Poop and Business Suits, check out reflections of a blogging mom who’s trying to balance work and motherhood and worrying about how she's shaping her daughter's future cosmetic spending habits.

Baby bikes and future facials are just a very small part of the price of parenting. This Bankrate.com story reports that a middle-income family will spend around $250,000 to raise a child from birth to age 17. Then they get to start paying for college.

The U.S. tax system offers some help for parents (of human children only). There's the child tax credit and another one to help pay for taking care of the youngster while you're at work.

Then there are some tax-favored plans to help you save and pay for the child's schooling. It's not a lot, but any parent will tell you, every bit helps.

The key to claiming these child-related tax breaks is being able to name the kid as your dependent. Anyone who's tried to decipher tax form instructions knows that is not always easy. It seems that with every tax provision there's a different set of rules and exceptions and definitions. The person who can come up with a Berlitz course for tax-speak will be the next multimillionaire!

This confusing language has been a major problem for many parents. But last year, the IRS made an effort to ease some of the hassle by coming up with a uniform definition of a child (for tax purposes only; for all other times, describing kids in general and yours in particular is left up to your imagination!).

TODAY'S TAX TIP looks at the new definition of a child. Of course, the IRS can never truly simplify things, but it has set up four basic tests a child must meet, in most instances, to be claimed as a dependent on a tax return. They are the kid's relationship to the taxpayer, the child's main place of residence, the age of the youngster and the support issue, meaning how much the youth contributes to his or her own upbringing.

You can check out the child dependency details (and exceptions) here. And by the time you're through reading, maybe the backlog at the panda cam will have cleared.